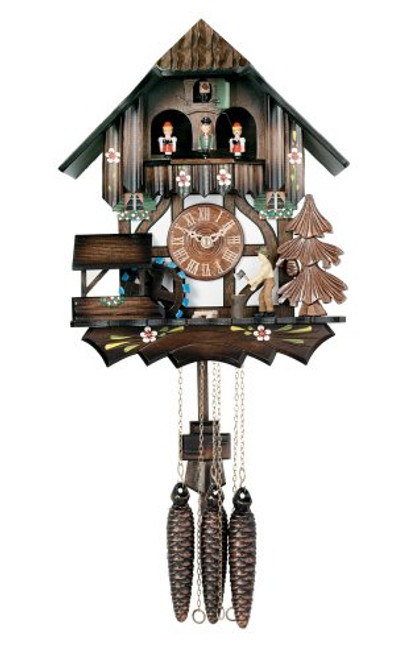 This chalet style one day musical German cuckoo clock features wooden hands, a wood dial with Roman numerals, and a warm light yellow hand-painted and hand-carved cuckoo bird. The cuckoo clock features hand-painted flowers, a wood chopper that chops wood, and a moving waterwheel. The dancers revolve on their platform every hour and half-hour. This clock also plays music on the hour & half-hour alternating between two different twenty-two note melodies: Edelweiss & The Happy Wanderer. Three cast iron pine cone weights are suspended beneath the clock case by three separate brass chains. The hand-carved pendulum continuously swings back and forth which controls the timing of the clock. If your cuckoo clock's timing should ever need adjustment, you can control the speed of your clock by sliding the shield up or down the pendulum stick. Sliding the shield down causes the cuckoo clock to run slightly slower, while sliding the shield up makes the cuckoo clock run slightly faster. On every hour the cuckoo bird emerges from a swinging door above the clock dial and counts the hour by cuckooing once per hour. (Example: At one o'clock the bird will cuckoo once. At eight o'clock the bird will cuckoo eight times) The half hour is announced with one cuckoo call. There is a sound shut-off device beneath the base of the cuckoo clock. Pushing the lever up disables the cuckoo birds cuckoo and the music. Pulling the lever down enables the cuckoo clock to play the music and cuckoo call. The 30 hour all brass mechanical regular movement, which is produced in the Black Forest of Germany, is wound once per day by raising the three pine cone weights. One weight powers the time, one weight powers the music and dancers, and the other weight powers the cuckoo bird and cuckoo call. *Great effort has been made to portray each cuckoo clock as accurately as possible. As with many handmade items, the exact coloration and carving may vary slightly from clock to clock. We consider this to be a special part of their character. This clock is covered by a two year limited warranty covering workmanship and manufacturers defects.
×